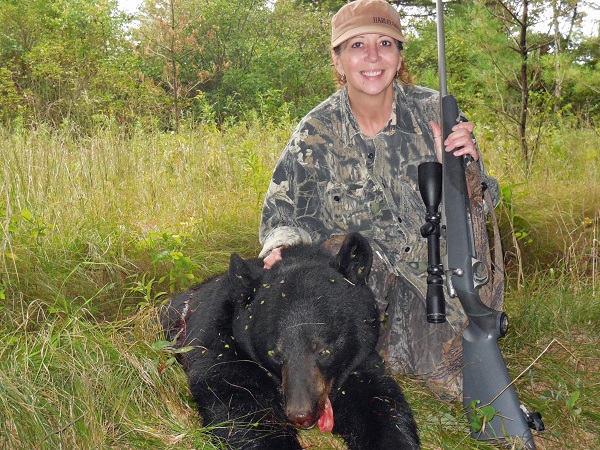 Nancy Oakes became hooked on hunting when she started bird hunting with her father as a teenager. After realizing how much she enjoyed being in the woods, she moved on to deer hunting, started to shoot trap and was then introduced to bear hunting. After an 8 year wait, she was excited to find out that she finally had a bear tag.

Two months before the season opened, she started to prepare and invested $500 in bait from the Log Cabin Store in Danbury. Her bait was a combination of 55 gallon drums of cookie dough and molasses. She chose a few places on her land to place the bait and put out game cameras to see what was coming in.

The season started on September 3rd and she began to spend time in her deer stand in the woods from mid-afternoon until sundown. She said watching all the wildlife come in while you’re sitting in the stand is one of the best parts of hunting. After 7 days of watching and waiting, she took one shot at a 3 year old dry sow and knew she had success. She waited until the bear didn’t move any longer and got some help gutting her on the spot and dragging her out of the woods. She harvested the meat, gave the fat to a friend who likes to use if for cooking and is having a rug made from the pelt. Not every woman you meet can tell you they had a successful bear hunt. But Nancy isn’t your average woman! She’s a very special part of our CENTURY 21 Team! – Wanda Boldon